A new indicator was developed by Nomura team called Nomura Economic Surprise Index for India (NESII) to predict the market direction using economic variables like GDP,IIP,PMI,WPI(inflation). Everyone knows that announcement of GDP , Index of Industrial Production , Purchasing managers index and Inflation will swing the market in either direction. Quants from nomura developed this "tactical tool" which can be used to predict the direction of market.

NESII is a weekly index and has shown a strong correlation with India's financial markets and can be used to confirm the price movement. 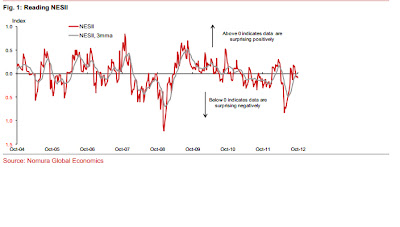 It shows NESII and NESII 3-month moving average. If NESII goes over zero, then it could be taken as a sign of turning point and turning point which could lead the market to new highs.

How effective is this tool, only time will tell as this is no more part of Asymmetric information to market participants.

What is in everyone's mind on the stock market in 2012?. There are many interesting things coming in 2012 like assembly elections in few states that includes Gateway to Delhi, growth rates decreasing in emerging countries, the Euro issue, FCCB on indian companies, NPA's of Banks. Before we go ahead into 2012 lets look at how markets performed in 2011. The below chart compares Nifty with CNX Infra and CNX Realty Index. These two were the worst performing sectors of last year with infra down by 37% and Realty down by 50%.

In the Realty Sector: we have couple of stocks which got embroiled in 2G scam that got hit badly, like the  DB Realt,a new entrant down by 74% and Unitech was down by 70%. Apart from these HDIL was down by 72% and DLF down by 36%.

Clearly,the only winner of 2011 was the FMCG sector,which was up by nearly 10%

Major contributors were HUL that went up by 33%, ITC up by 15%, Marico up by 20%, Jubliant Foods up by 20% and on the other side McDowell was down by 68%  due to the effect of Kingfisher Airlines that almost went bankrupt.

And the possible reasons for markets tanking down in 2011 are:

It will be very challenging for few companies in 2012 to rise money to fund ongoing projects. One issue which will haunt many a companies is the FCCB redemption. Some companies have FCCB maturity in first half of the year and their Stock Prices are currently trading at 80-90 % down the conversion price. Such bond investors will not convert there bonds to stock and therefore companies would have to repay the debt in foreign currency.As Rupee is depreciated by about 15%, this makes the redemption payment for companies even more tough.
Examples : SUBEX,SUZLON,RCOM etc..

Also, the recent announcement by Govt. about borrowing plan to overshoot by another 40,000 Cr will make matters worse in coming days. I am guessing it will touch new lows in 2012 but will end up in positive by the year end. Lets see how markets open in the first day of new year tomorrow...