California is next Greece ?

The cost of protecting the debt against default in the below  table shows few states US are facing a difficult times than the present Euro zone. May be its time for  Arnold Schwarzenegger to make Terminator 5 a Hit and use that money to pay of the debt in US states.


A credit default swap (CDS) is a swap contract in which the protection buyer of the CDS makes a series of payments to the protection seller and, in exchange, receives a payoff if a credit instrument (typically a bond or loan) goes into default.

Here is the latest Data from CMA Datavision which tracks
The CMA Sovereign Risk Monitor identifies and ranks the world’s most volatile sovereign debt issuers according to percentage changes in their 5 year CDS.

CDS can be checked at this location: cmadatavision.com
Posted by Lekkala at 9:37 PM No comments:

Just came across this acronym in web and was quite amazed at its usage in real world , am not sure of its usage in real time .John Williamson, a Washington-based UK economist credited with developing the BBC. This policy can give central banks the  flexibility to respond to changes in both local and global conditions to maintain export advantage and control inflation.
And here is how its related to present context :
Here is the Transcript from PBC on Renminbi(or Yuan --Chinese Currency) policy change which
led to rally in global markets across the world. I have been tracking this news for a couple of days though not clear at its consequences . Now why all of sudden Chinese changed there stance from pegging with  dollar to a flexible rate ( Though this flexibility will be debated in coming days across the board rooms )
Link for Change in Exchange Rate Policy on June 19th

There is a lot of pressure from US on China about exchange rate peg and how its creating  global imbalances and  us-may-label-chinacurrency-manipulator by June 20 if China doesn't take any steps ..and China did take a step on June 19th (Saturday evening or Sunday morning ) so as to avoid a report from US which was supposed to come in mid April got delayed to June 20 on labeling China as currency manipulator


Starting from July 21, 2005, China has moved into a managed floating exchange rate regime based on market supply and demand with reference to a basket of currencies. Since then, the reform of the RMB exchange rate regime has been making steady progress, producing the anticipated results and playing a positive role.

US is pressuring china to abandon the policy of pegging yuan to dollar and to go for a floating exchange rate BBC  looks like this has worked out and for time being it allowed a float rate with in a small band of 0.5% and if currency hits the boundaries then it might intervene in the markets .
This 0.5% band move is for a day  and the risk of currency fluctuations is very less and US may pressure to increase the Band...I guess this would take some time to implement as China bought some time from US by making changes to the policy and thereby not labeling it as currency manipulator for time being

When the current round of international financial crisis was at its worst, the exchange rate of a number of sovereign currencies to the U.S. dollar depreciated by varying margins. The stability of the RMB exchange rate has played an important role in mitigating the crisis´ impact, contributing significantly to Asian and global recovery, and demonstrating China´s efforts in promoting global rebalancing.


China´s external trade is steadily becoming more balanced. The ratio of current account surplus to GDP, after a notable reduction in 2009, has been declining since the beginning of 2010. With the BOP account moving closer to equilibrium, the basis for large-scale appreciation of the RMB exchange rate does not exist. The People´s Bank of China will further enable market to play a fundamental role in resource allocation, promote a more balanced BOP account, maintain the RMB exchange rate basically stable at an adaptive and equilibrium level, and achieve the macroeconomic and financial stability in China.

Economists think China faces a potential challenge in introducing a managed float, since a small revaluation would continue to attract speculative foreign capital in anticipation of further currency appreciation. As a result, China may have to widen its currency trading band to gain market acceptance.

For a short term time period its a positive news to the market especially metals sector and Textile sector.
But i am afraid its just the cheap money flowing into the marker for now..and anytime the flow can be reversed

Posted by Lekkala at 6:31 PM No comments:

I came across another Indicator which can be used to gauge economic confidence among analysts.

The ZEW Indicator of Economic Sentiment for Germany drops by 17.1 points in June 2010. The indicator now stands at 28.7 points after 45.8 points in the previous month. This value is slightly above the indicator's historical average of 27.4 points.

Detailed Results can be seen here

Looks like the Euro Crisis is having an impact on Markets and Economy .Fiscal Policies of high debt countries will be watched closely by markets and any disbelief on the countries not reducing debt and growth not improving then it is going to be disaster in coming days..

We have seen on June 4th how markets tanked after these comments:

Hungary's bonds fell after a spokesman for Prime Minister Viktor Orban said talk of a default is "not an exaggeration" because a previous administration "manipulated" figures.

Markets are in very fragile state and reacting to every bit of news coming . They are  in a stage where if governments reduce debt by increasing taxes,salary cut etc and there by slowing the growth is negative to them and if Govts increase the spending and increasing the debt is negative to them...Will see how it turns out to be in coming days

At least i feel  India is somewhat better shape though it mismanged its debt during the boom years..but as we are mostly consumption oriented domestic economy with good enough savings we might not indirectly feel the pressure of it . But after all this is a global economy and we are going to have ripple effects if anything again happens in west.

Posted by Lekkala at 8:58 PM No comments:

Email ThisBlogThis!Share to TwitterShare to FacebookShare to Pinterest
Labels: Opinion

Listed Firms must have 25% public Holding..Who will benefit from it?

Here comes the UPA Government Promise of increasing public stake in PSU. Govt made changes to the rules of listed companies to maintain a 25% non -promoter holding ..mean public holding it includes FII,Mutual Funds,other corporates as well as Retail Investors..

Why did they made a change to the rules? so as to not to get opposition from LEFT with respect to stake sale in PSU's and Unions..( we have to wait for some more time to get a clarity on it )

Link for the news item.Listed firms must have 25% public holding 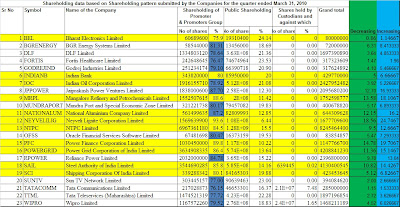 Marked in Yellow are PSU's and government is majority holder with more than 75% in it. The limit can be achived in 2 ways one is to sell the shares to public and others is two go for fresh issue of issue of shares to public there by keeping same number of shares with it and increasing public shares..

Another question comes up..how are they going to price the issue..From past history we can clearly see when ever we have a stake dilution by govenment we can see market reacting negatively towards it example of recent FPO are REC , NTPC, NMDC NMDC offer tanking a lot after the announcement of stake sale..coz they will go for a disscount to the existing CMP to attract the investors ...so can we expect the same for these companies in coming days .

Apart from PSU's we have JP Power,Reliance Power,WIPRO,DLF and others  should be divesting stake though its very less when compared to PSU's .Since its a small stake for them i guess  they can manage..but are they ready for it..have to see?

How does govt benefit from the PSU stake sale? They can use the money raised to cover up its debt.(Regarding debt i have mentioned in another post about the debt problem india will face in coming years).if that's the case then money is not going for productive means..and also it means they have to sacrifice some part of  dividend amount they used to receive