yep finally made some progress on data collection and had some tough time in automating it but not done as of now..So here are some technicals of Todays Markets

below is the chart of nifty got from nse website 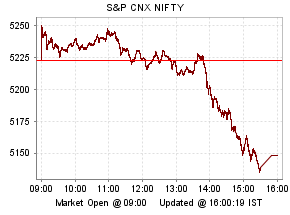 It all started from 2 pm IST and market started sliding
from then, initially i thought its a normal slide and when it went from 5220 to 5200 but once it breached 5200 there was some choppiness in the slide and it could not withhold the pressure of bears( or weak hands or SL got triggered) and blood was flowing for next 90 mins and even in last mins of trading also it didn't show any respite


We will see how Options were Traded and which holds the maximum open interest. Options Trading is generally used for hedging ,but there will be traders who take positions in expectation of making profit...(u know what 90% options traded will expire worthless )

Another important thing we need to see in options is Many people(includes myself until some time back) considered option buying is what determines the market direction but that notion of direction is wrong . why?
Its option writer (seller) is taking maximum risk and writing the option in return for the premium by expecting  that market will not close above strike price + premium in case of CALL and Strike Price - Premium for PUT option. Since option writers doesn't want to loose money(in fact who one wants to loose money? No one) .The Market direction is effectively decided by them. In case if any unwanted situation arises then writers may close there positions and might go for another strike price..This is how Open Interest Changes from Day to Day on Different Strike Prices

Here is what happened in Options on May 4th 2010

U can see from the below graph that there is good change in Open Interest in 5000 put ,5100 put and 5200 put that means market may settle anywhere between these values in coming days, Today there is Good change of Open Interest of 4800 put which indicates that lot of put writing happened at that strike price and market may reach that position and at expiry and we can say that market has Good support at 4800
5100 put has Good accumulation and one can see that 5100 is having some support for now


Coming the CALL side..we have good Open Interest (RED COLOR) in 5300 CALL which means there are many writers over there expeccting that market will not cross 5300 and that means Market has a near Term resistance of 5300. Good number of contracts were written for this lot which can be seen from change in open interest (GREEN COLOR) 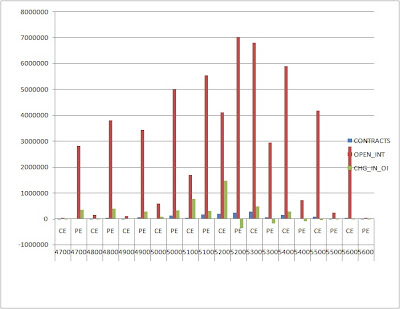 One can clearly see that IN THE MONEY PUTS were closed that lead negative change of OPEN INTEREST for 5200,5300,5400,which indicates that market may go down in coming days( This observation needs to be checked again). Reason why i made such a statement is why will option put buyers will close there IN THE MONEY PUTS.???.if they expect market to go down..they will  earn good return right?...Here comes..its not options buyer who wants to make money..its option writers who will make money...and now if market goes down ...IN THE MONEY positions will be huge loss...that's the reason they(Option Writers) closed there positions..(but anyway i will check this hypothesis again) 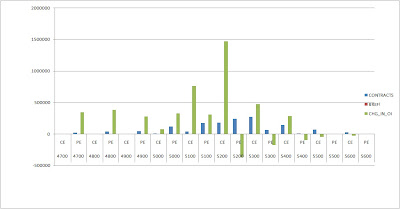 P.S: I Made a honest observation from the Data Available at NSE india Site , Kindly forgive me if i made any wrong assumptions and analysis