Everyone is talking about Greece default and Euro region problems..including naive like myself. But why there is less noise on India defaulting. One reason might be  India is pretty much safe ,thanx to RBI for restricting  FII to hold India's debt. Greece holds much of its debt in form of External Debt ,mean foreign banks used to fund its balance sheet and as its time to repay them back and unfortunately they don't have the resources to pay back..alternatives for Greece are going default..or restructure the debt and let the future generation face the sufferings.I guess the chance of happening later is more

Now coming to India, we also have debt ,but majority in the form  internal debt. Government borrows money from market by issuing securities called G-secs (long term) T-bill (short term) and it will pay the lender at specified interest rate until the securities mature after which  it has to repay the money back.

RBI will do these kind of transactions,apart from this RBI also has tools like MSS to increase the liquidity in market by buying back the government bonds and decrease the liquidity by selling the bonds.Generally RBI has calendar in which it gives dates on selling government securities
Here is the link for this year RBI Calendar

So Where are we Standing on G-sec till now..how many outstanding securities does Indian government hold.
How much interest are we paying out?Here is picture which gives some understanding on Gsecs size and Maturity .Y Axis shows Gsecs amount in Crores and X-Axis shows Maturity Date

The Larger the Bubble means the higher the security value which government borrowed and it needs to repay that amount at maturity . We see in 2010 and 2011 we have small bubbles mean government has to repay less  amount this year, They can do this by using new dated securities or selling government stock,increase taxes etc ..Problem is if they issue new securities say 2040 bond, then they have to pay the interest till then which is a burden and if they go for selling there stake in PSU's then they will miss out the dividend  and also face political pressure. Am not still not sure of which way to support coz issuing a new bond is like a ponzhi scheme and selling a stock is like killing golden goose

Till now we havent faced the real problem coz its a small repayment in 2010 an  2011, it expected good chunk from 3G revenue and sale of Govt Stock. But the real problems for govt starts when they to repay the amount in 2013,2014,2015. Larger bubbles start from then and real interest burden will start .And if they issue new securities to cover up them then interest burden will increase .See the below graph on Interest payment by government (budget estimates) 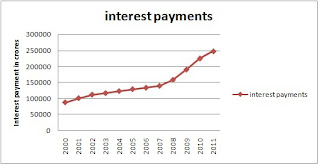 See the rate at which Government is paying the interest ,there is a sudden spike around 2007-08 and 2008-09 which might  be attributed to government issuing more bonds for more spending on farmers loan waiver and pay commission.Slope got a bit horizontal for 2010-11 because government planned to issue less number of bonds and expected more revenue in from 3G and sale of stock..But 3G cannot happen always right,..so from where does the government gets revenue to fund the balance sheet apart from issuing new secs and increase the interest burden and if this burden continuous in coming years ..then i believe there will some be some turmoil in future ..hehe. :) It has another option...Printing Money, but where will it lead? Will cover up later..
Posted by Lekkala at 2:15 AM